By Justine Bourke on 5 February, 2020 in Uncategorized 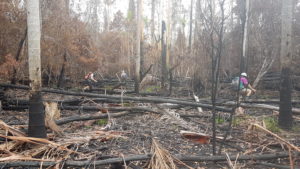 Rainforests contain 40 million years of evolutionary history with a range of plant and animal lineages and communities with origins in Gondwana. The ancient supercontinent Gondwana broke up approximately 180 million years ago and as Australia drifted away from Antarctica, rainforests contracted to its east coast and far north. Only 1 percent of the original 40 million year old Gondwanan rainforest survives in Australia. Read more.

Australia has the most diversity of remaining plant and animal lineages with Gondwanan histories. The Gondwana Rainforests of Australia are world heritage listed in recognition of their unique landforms, species diversity and role in demonstrating the development of life on earth. Read more.

In particular, the Nightcap National Park (NP) area contains many plant and animal lineages with Gondwanan histories, including many threatened species.

Historical logging activities increased forest vulnerability to fire as flammable eucalyptus components were accentuated at the cost of fire resistant rainforest species. On eucalypt ridges smaller re‑growth trees, such as blackbutt or Eucalyptus pilularis, growing close together with crowns touching enhanced the spread of canopy fire.  Shrubs growing on the forest floor due to increased light penetrating the canopy were dried out by drought and promoted fire through the understory. Logging debris pushed into the rainforest and increased fire heat and penetration into rainforest.

Recovery of the Nightcap area ecosystem is likely to take hundreds of years. A total of 16 plant and 27 animal threatened species were affected by the fire. Tragically, approximately 25 to 30 percent of the critically endangered Nightcap Oak species was lost to fire. The endangered peach myrtle species were also affected. Brushbox and palm forest species were burnt at Terania Creek.

There are signs of recovery in the eucalyptus forests as these species are fire adapted. The eucalyptus ridgelines are re-sprouting and acacias have re-seeded. However rainforest species are not fire adapted and it is likely that some will continue to die due to the stress of the fire event. Lowland rainforest was less affected by the fire than upland rainforest. The Mt Nardi rainforest was sprayed with fire retardant and is likely to recover as there are signs of re‑growth.

Click on below image to watch an earlier video of Dr Kooyman discussing Gondwanan rainforest.