By Keith Maxwell on 2 January, 2023 in Bushwalking history

Hobnail Canyon is a short, pleasant canyon located just off the Bell Road past Mt Tomah.  Now hobnails are a kind of boot cleat popular in the pre-WWII era.  They were nailed onto the leather sole of boots to minimise slipping.  Did the first bushwalkers through the canyon wear boots or were they from YMCA Hobnails Bushwalking Club?

From 1952 to 1970 the Hobnails were a club of young men 17 – 21 years of age with a strong reputation.  This club was just one of a strong group of bushwalking clubs in the YMCA during 1950s / 1960s where boys could progress into bushwalking as they grew older.

Young Pioneers included boys 12 – 14 years of age.  These boys could then progress to the Venturers (not Scouts) as they grew to 17 years old.  When my younger brother joined the Venturers in 1969, they were down to just three members and were officially folded up a few years later.  From 18 years of age young men and women (note) could join the YMCA Ramblers.

The YMCA Ramblers were the longest lived of these clubs.  Formed in November 1938 by Harry Black and three others it lost two members in WWII.  At their AGM of 1978 the Ramblers left the YMCA but had a final BBQ at Neilson Park on 23 November 2003.

The Ramblers always had a tense relationship with the Young Men’s Christian Association (YMCA).  Not every member had a tent, so they were often shared including ‘co-tenting’.

‘Old’ Hobnails were meant to progress to the Ramblers except that they mostly didn’t instead going to the Kameruka Bushwalking Club (KBC).   From 1946 to 1988 the KBC were renowned for doing tough and exploratory bushwalks.

So, what did hobnails look like?  Dunlop Volleys sandshoes were all the go for the Hobnails bushwalkers.  I can remember an ex-Hobnail telling me that he could not recognise a hobnail (boot cleat) when he was shown one. 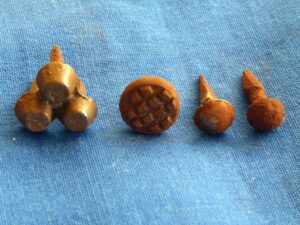 You can find club badges for the Hobnails, Ramblers and KBC among many others at the Bushwalking NSW website club badges page.