By Holly Wang on 12 February, 2019 in Conservation, Events

In December 2018 unionists and environmentalists came together to celebrate Joyce Moffitt (1930-1999) and Vern Moffitt (1924-2001) past members of the NPA who were pivotal in establishing NPA’s Bathurst Branch. 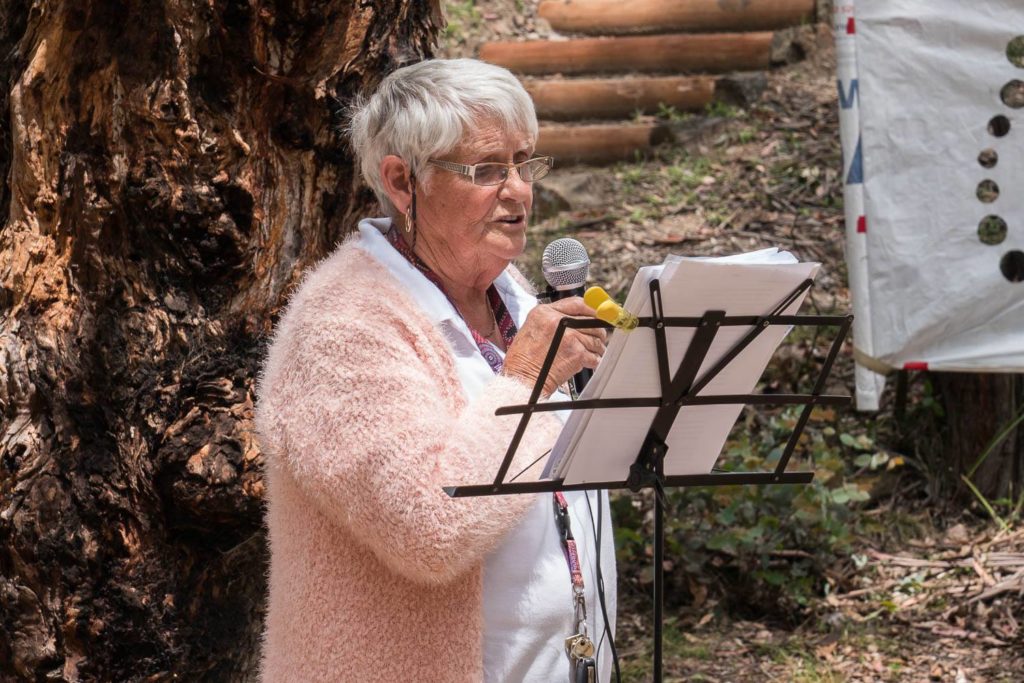 Retired unionists travelled to Lithgow by train to celebrate the environmental achievements of NPA members Joyce and Vern Moffitt, who were pivotal in establishing the NPA’s Bathurst Branch, in December 2018.

Joyce and Vern Moffitt played a significant role in founding the Lithgow-Bathurst environment movement.  Joyce and Vern were founding members of NPA’s Central West Branch, the Bathurst Conservation Group and Central West Environment Council.  When Joyce was the Vice President of the Bathurst Conservation Group she wrote submissions opposing underground coal mining on the Newnes Plateau and highlighted the need to protect its rare and endangered Bathurst copper butterfly Paralucia spinifera and upland swamps.

On arrival at Lithgow Railway Station unions and environmentalists marched down the main street of Lithgow carrying their placards, followed by a bite to eat at Lithgow’s Tin Shed Café.  There up to 70 other environmentalists, community members, and even the odd coal miner met and listened to speeches that included Aunty Helen Riley, Wiradjuri Elder;  David Shoebridge, Greens MLC;  Councillor Wayne McAndrew, Lithgow Deputy Mayor;  John Koch, Mick Tubbs and Terry Relph, union Elders;  and Kathryn Newton, Lithgow Branch of the National Trust.

Former Blue Mountains Mayor Jim Angel, good friend of Joyce and Vern Moffitt, recounted how Joyce and Vern were passionate about protecting the Gardens of Stone and how the celebration was “long overdue”.

Due to difficulties in accessing the ‘Moffitts Pagodas’ NPWS sign in the Gardens of Stone National Park, a replica sign was ‘unveiled’ at Maiyingu Marragu Aboriginal Place.

More speeches were held again at Maiyingu Marragu Aboriginal Place again starting with Aunty Helen Riley, Wiradjuri Elder;  followed by Jim Angel, former Blue Mountains Mayor;  Bob Debus, former Member for Blue Mountains; and Keith Muir, well respected and long time campaigner for the Gardens of Stone who said that nothing in the Gardens of Stone reserve proposal would threaten Lithgow’s economy and that in time Lithgow would become the new Katoomba.

The replica ‘Moffitts Pagoda’ sign was proudly unveiled by the Moffitt family.

Peter Drinkall, Lithgow poet opened the Maiyingu Marragu ceremony with his song ‘Gardens of Stone’ and then finished the ceremony with his beautiful song ‘Maiyingu Marragu’.  Then Aunty Helen invited guests to walk up some steps to see the Wiradjuri people’s treasured, sacred and spectacularly beautiful rock art but to make sure, before their ascent to leave any negativity behind.

Then the retired unionists and guests reboarded the ‘Ebersoll bus’ and headed to the Clwyd of Vale Club where the Vale Ladies Club served a delicious, old fashioned afternoon tea with homemade sandwiches, cakes, slices and plenty of cups of tea.  Speeches were made again beginning with the Moffitts’ sons – Michael and Robert – who shared stories of their parents.  Michael eloquently described the danger of disunity between workers and environmentalists.  Corporations that destroy workers’ rights also destroy environmental rights.

Trish Doyle, MP, Member for Blue Mountains, joined the afternoon tea and acknowledged the important work that unionists past and present had done building positive and constructive bridges between unionists and other environmentalists.

Trish Doyle finished with graciously announcing the winners of the first ever ‘Gingerbread-Pagoda-Houses’ that Retired CFMEU Clelia Koch had spent weeks in the kitchen preparing.  Further raffle prizes were donations of a NSW Parliamentary Pack of Wine, overnight accommodation at the Newnes Hotel Cabins and the Fat Wombat Farm Bed & Breakfast.

Returning to the Lithgow railway station, the Lithgow Community Choir farewelled the unionists with songs of coal miners before the train whistle blew telling everyone to board the train.

CRUMA plans to hold a future event in 2019 to celebrate NPA’s Moffitts with the installation of a plaque that highlights their commitment to both Lithgow’s workers and Lithgow’s Gardens of Stone.