By Kirsten Mayer on 28 July, 2017 in Bushwalking history, Conservation

Over 150 years ago, the Kedumba Valley in Blue Mountains National Park was first settled.

In 1832, Thomas Maxwell, an Irish convict, arrived in Sydney and married fellow convict, Elizabeth Osborne, soon after. The couple gave birth to twin boys, one of whom was named William James Maxwell. Born on April 27th 1832, William Maxwell later moved out to the Burragorang area (in modern times home to Warragamba Dam) where he met and married Mary Thompson in 1855. In the 1860s, Maxwell worked as a stockman and ran his own cattle farm to earn a living.

Whether Maxwell first applied for a land grant in Kedumba Valley in 1859 or 1889 is not entirely clear, but the family left a particularly lasting legacy in the form of Kedumba Hut. Three generations of the Maxwell family lived in Kedumba Valley until 1992. During these years, the family constructed five different timber slab huts, as well as other utility buildings. Of the huts, only one is still standing today, and this ‘Kedumba Hut’ has become a place of historical significance.

Built in 1925, Kedumba Hut is an outstanding example of Australian pastoral life removed from larger settlements. According to National Parks & Wildlife Services (NPWS), the hut is an “excellent example of vernacular bush craft” with “timber detailing… of exceptionally high technical… and archaeological potential.” The site is also a prime research target to learn more about vernacular buildings from the 1890s to the 1920s in New South Wales. Very few buildings of its type and age have survived, giving it significance as a “rare and endangered species.” 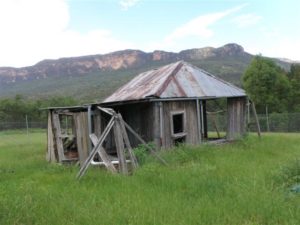 In 2001, a report into the heritage value of the hut was commissioned. The results suggested that Kedumba Hut had considerable state, and possibly even national, significance. The report also detailed that the hut needed urgent stabilisation work or it was at risk of collapsing further. Maintenance to stall the hut’s fall into disrepair was completed in 2004. Over a decade later, a second report was commissioned, this time to determine if the hut could be re-used and better preserved. In order to achieve both ends, the report suggested that the best strategy was to fully restore the site to the condition and function it had in 1925.

With the above in mind, NPWS has put together a plan to restore and refurbish Kedumba Hut to ensure it remains for generations to come. Working with a number of partners, NPWS plans to raise $350,000 for restoration as well as ongoing maintenance. Upon completion, the site will be heritage listed and its preservation guaranteed. Keduma Hut will also be made available as free overnight accommodation for bushwalking groups that can be booked on request. NPWS propose to ensure the hut is weather-tight and hold simple camp-style beds. Water, gas and electricity will not be provided. 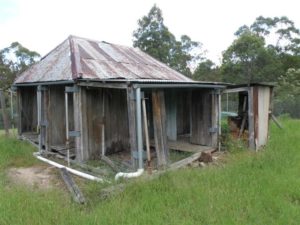 Once the hut has been restored, it could be the perfect opportunity for bushwalkers to take a rest, enjoy the beauty of Kedumba Valley and reflect on what life might have been like for the Maxwell family over 150 years ago.

You can visit Kedumba Hut in the Blue Mountains National Park on the 19km Kedumba Valley Loop track.

Jack, Ian. ‘Of the hut I builded’: the Maxwells’ slab structures in the Blue Mountains of New South Wales. Australian Historical Archaeology 27, 2009. Pp 55-66.

Thanks to guest writer: Andrew Barker