By Keith Maxwell on 30 January, 2019 in Bushwalking history

The Blue Mountains holds many mysteries, but one is unusual.  Among the mysteries are two planes and a memorial plaque.  The Blue Mountains have claimed many planes but mostly their crash time AND location is known.  Aeroplane Hill in the Blue Labyrinth outside Hazelbrook is the crash site of a then new RAAF Wirraway fighter from a group of four being relocated on 1 August 1940.  More recently, in 1993 Bushwalkers Search and Rescue (now Bush Search and Rescue NSW) helped find (deceased) the pilot and passenger from a Cessna that disappeared over the earlier October Long Weekend.  CMW bushwalker, Brian Walker saw the wreck on a ridge across a deep valley off the Boyd Plateau (near Kanangra Walls).  So, the time AND location of these crash sites are known.

BUT, two planes remain as a mystery.  WHEN they crashed is known but their location is NOT known.  The United States Marine Corps will be eternally grateful to anyone who could locate the wreck of a Dragon Rapide biplane freighter (and its passengers).  Surprisingly, many of these planes were still constructed in WWII and continued in service post WWII.  On 17 April 1943 two US Marines were passengers on a Dragon that was seen to be in trouble in the lower Blue Mountains.  Again, on 22 October 1954 Max Hazelton came back from the dead when he walked into a Post Office now covered by water of Warragamba Dam.  He had survived a crash and a six day walk from the Kanangra Walls area.  Max later established the regional Hazelton Airlines.  In 2014 Dick Smith and Max unsuccessfully tried to locate his crash site.  Thus, the time BUT not the location of these aircraft crashes is known.

What about a different mystery where the LOCATION is known but NOT when and why??  The location of a memorial to a WWII Battalion is known but little else.

Splendour Rock at the southern end of Mt Dingo in the Megalong Valley is an outstanding location to remember bushwalkers who died in the armed services of WWII.  From Sydney Bush Walkers (SBW) records we know the names of the first bushwalkers to see this site and when its fabulous memorial was installed in 1948.  “The Bushwalker” archives at www.bushwalkingnsw.org.au describe the dedication service, led by Paddy Pallin, on ANZAC Day 1948.  For many recent years there has been a simple memorial service each ANZAC Day at Splendour Rock.  All bushwalkers should consider attending this moving service with its dry overnight camp at least once.

So, not only do we know the location and time of dedication of the Splendour Rock plaque but the names of the fallen bushwalkers we remember each year.  In 2014 the NSW State Library eagerly accepted the nomination, by the author, of Splendour Rock for their register of NSW War Memorials; see www.warmemorialsregister.nsw.gov.au/content/bushwalkers-war-memorial-splendour-rock 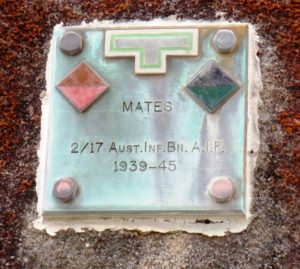 Very few at Splendour Rock would know where to look for a much smaller memorial to 2/17th Battalion of the WWII A.I.F.  (The ‘second’ Australian Imperial Force; A.I.F. was the Australian Army of WWII).  Why was this plaque installed to remember “MATES” of just one of many battalions of one of several Divisions raised in WWII?  Information from the Australian War Memorial (AWM) shows that during WWII the size of a battalion was modified but was still less than 800 men.

Just to the west of Splendour Rock is a small south facing wall.  Location for this plaque must have been more important than access as you need to scramble over a large boulder then look up.  The plaque is above your natural eye height.  Who were the “MATES”?  Some only or all the infantrymen of this particular Battalion?  Author, Michael Keats is more than 90% certain that bushwalking historian, Wilf Hilder (deceased) told him that Gordon Broom installed this plaque.  Now, from National Australian Archives we know a Gordon Broome served in the 2/17th Battalion.  Much later he was a member of Sydney Bush Walkers (SBW).

Thus, here is the mystery.  We know the location of a memorial plaque to ‘MATES’ possibly installed by Gordon Broome BUT not when and why.  Since it is near the Splendour Rock plaque, which was dedicated in 1948, this ‘MATES’ plaque should be post 1948.  Many lines of inquiry have failed to provide further information.

SBW records cannot offer any further information.  The family are not keen to be contacted.  The 2/17th Battalion Association (BA) is mostly made up of ex-servicemen post WWII who trained prior to disbanding the Battalion in 1946.  The few very old hands still alive from WWII cannot help with this mystery.

Wilf Hilder knew much about the Blue Mountains, but we can no longer ask him.  An important logbook would seem to have been lost in a fire of Paddy Pallin’s shop around 1970.  An entry from a 1958 logbook in the NSW State Library mentions that an earlier logbook was passed onto Paddy Pallin.  The Paddy Pallin archives have no mention of this ‘MATES’ plaque.  Bushwalking NSW has incomplete records of old “Bushwalker” annuals / magazines on their website.  Equally, there seem to be no records of the names of the 140 bushwalkers who attended the 1948 dedication.

However, Gordon’s name does appear many times in campaigns from North Africa to New Guinea of the official history of the 2/17th Battalion (plus a privately published history of “B” Company).  He did not escape injury being wounded during close combat in New Guinea.  Is Gordon remembering the ‘MATES’ who helped him survive but also mindful of other mates who could not be helped? 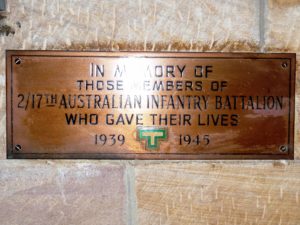 For many years post WWII Gordon was active in the BA social sub-committee.  In 1953 he also joined a sub-committee to add a further memorial to those of the 17th Battalion (from WWI) at St Thomas Church, North Sydney.  Eventually in 1956 a plaque was installed with the words; “IN MEMORY OF THOSE MEMBERS OF 2/17th INFANTRY BATTALION WHO GAVE THEIR LIVES 1939.1945″.  The BA still have a service of remembrance each year on the Sunday before ANZAC Day.   Could the “MATES” plaque at Splendour Rock have also been installed around this time?

So, why is this “MATES” plaque at this particular orientation?  Small trees have now grown up but it would seem that the plaque has been placed, up high, to follow the sun from sunrise to sunset of “The Ode”, “… At the going down of the sun, and in the morning, We will remember them…”

Can we be sure of any emblems on this plaque?  There can be no doubt that the shallow “T” in the top centre is the ‘T for Tobruk’ award that can only be shown by Battalions who took part in this terrible siege of 1941 in North Africa.  (The encircled troops still took the fight up to the German “Afrika Korps”.  The repulse of the Easter 1941 attack may have been the first defeat of a ‘blitzkrieg’ attack.)

The importance of the diamond emblems can only be guessed at since the logic of Gordon Broome remains unknown.  While the colours must have been very deliberately chosen there are two possible explanations.  Information from the AWM suggests that the black over green are the colours of the (WWI) 17th Battalion while brown over red applied to the (WWI) 23rd Battalion.  Now, both the 2/17th and 2/23rd Battalions were part of the Tobruk siege but why mention the 2/23rd when records also show close liaison between the 2/17th and 2/13rd Battalions in this siege.  OR do the diamonds apply to liaison between battalions in the later New Guinea campaign?

An alternative suggestion from a member of the BA is that the 2/17th Battalion used the black over green diamond until they sailed to North Africa when the brown over red diamond was adopted.  The problem is that battalion diamonds from WWII have a narrow grey border.  Either way this plaque would have required some planning and expense.  There is no maker’s mark on this plaque.  The high position of this plague at Splendour Rock suggests that its installation may have required two or more bushwalkers.  Perhaps the mystery is a deliberate act so we should just remember the many ‘MATES’ of the 2 A.I.F. who did not return.

So, the mystery at Splendour Rock seems to endure as on another ANZAC morn the sun slowly rises again over the distant Kings Tableland to stab the valleys with shafts of sunlight.  Cloud hides the water of Lake Burragorang.  The memorial calls us to remember the fallen but leaves us to seek out their names.  The same sun starts to light up the ‘MATES’ plaque; lest we forget.  Does it matter that we don’t understand the full mystery?  The plaque was not put there for you or me but by fellow mates.  You should, like the author, now seek out this “MATES” plaque each time you visit Splendour Rock to stand in silent respect and wonder at the strength of friendship plus dedication required to remember ‘MATES’ at this remote location.