By Keith Maxwell on 30 January, 2019 in Bushwalking safety

Should a small battery tester be considered an essential item of bushwalking equipment?  Modern LED torches just keep getting better and better.  Battery technology has also gone forward in leaps and bounds with various types that seem to last forever and ever – “best before 20xx”.

My first bushwalking torches used incandescent light bulbs that were miniature versions of house light globes.  Like house globes, torch globes had a limited life span so the folklore was always to carry a spare globe.  But LED lights are so much brighter from a lamp with an almost infinite life span plus they keep getting better and better.  A little while ago the switch on a 100 Lumen head torch failed.  The replacement torch under warranty was 160 Lumens.  Same model just a few months apart.

Our early torch batteries were the ‘red’ carbon batteries.  The Zinc case formed part of the electrical reaction.  They would self-discharge in a short time (go flat) often leaving a corrosive mess.  The batteries were not very powerful so torches had to be big to hold “C” or “D” (large batteries).  Now, alkaline “AA” and “AAA” batteries can be purchased in multi packs.  Even better types of battery are available or your choice of rechargeable battery.

Thus, it is easy to keep a light, compact, bright headlight torch that uses small “AAA” batteries at the bottom of the day pack ‘just in case’ – no wandering in the dark from an unexpected delay.

However, since batteries last so long it is easy to forget to check them.  Most LED torches have a system of still giving out light as the batteries progressively fail.  Corrosion can still eventually happen.  So, you turn on your torch in a bright room and you have light but how good is it really? 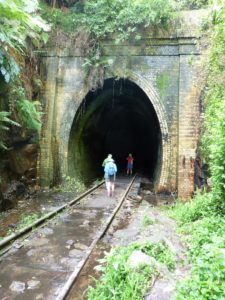 Such a torch let us down recently at a disused, open access railway tunnel at Helensburgh.  This amazing long single-track tunnel was brick lined for reinforcement.  The current double track railway through the mountainous terrain has by passed this tunnel.  It was dark enough to have impressive glow worms.

Fortunately, a dud torch was not a problem as our group had all taken spare torches.  Later at home, I found corrosion had started on one battery.  My battery tester indicated that the other batteries were also on the way out.