By Keith Maxwell on 4 December, 2020 in Bushwalking history 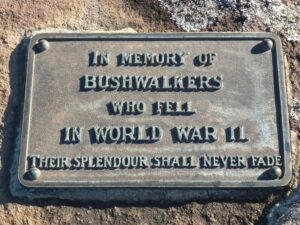 Splendour Rock is a special place that remembers bushwalkers from Clubs of Bushwalking NSW (BNSW) killed during WWII with that wonderful phase “THEIR SPLENDOUR SHALL NEVER FADE” and it seems that it is getting better known outside Australia.  Bushwalkers / walkers who go to Splendour Rock, in the Wild Dog Mountains of the Blue Mountains, are rewarded with an amazing wide vista of the southern Blue Mountains from Kings Tableland in the east to the Blue Breaks and Lake Burragorang (southwards) then finally to Kanangra Walls in the west.  Splendour Rock was chosen for its location but also as a bushwalkers war memorial so it does require a bushwalk to access it.

In 2014, on behalf of BNSW, I had Splendour Rock placed on the register of NSW war memorials maintained by the State Library of NSW.

From an incomplete series of visitor logbooks in the State Library of NSW we can see that Splendour Rock has always attracted bushwalkers, Scouts and others.  It is just not groups from NSW but groups from within and outside Australia (not just Europe).

Similarly, “Places of Pride” is a virtual register of war memorials from all over Australia maintained by the Australian War Memorial (AWM in Canberra) as it aims to keep the memory alive of all Australians who died in past conflicts.

Recently, again on behalf of BNSW, I added Splendour Rock to this virtual list, of Australian war memorials, maintained by the AWM.

Splendour Rock is obviously a little different and probably unique in Australia and NZ.  In the Places of Pride text box for information on Splendour Rock I had to stress that access was only possible via a bushwalk.  The registration process with Places of Pride required a location given as a decimal latitude and longitude.  Since, the interactive map could not find a recognised road it suggested that access was possible via a dirt road.

Splendour Rock is now remembered as both an Australian “Place of Pride” as well as a NSW war memorial.

Sutherland Bushwalkers turn 50
A few words from the President