By Justine Bourke on 9 October, 2020 in Bushwalking history

A piece of our history by Colin Wood, Armidale Bushwalking Club 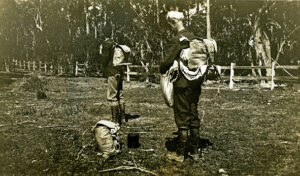 Rae Else-Mitchell was an active member and office bearer in a number of community organisations concerning history, arts, libraries, medicine, education, financial and public administration and town planning. Rae’s obituary in The (London) Times described him as being “among Australia’s cleverest postwar judges and administrators, accomplishing two distinguished careers of almost equal length.”

However Rae Else-Mitchell was also a man well known by the bushwalking fraternity.

Else-Mitchell lived in Springwood and loved the magnificent Blue Gums across the street from his home. He was shocked when one day in the early 1950s he found the land owner showing logging contractors around the property.

Else-Mitchell was determined to save the trees and so he donated enough money to Council to purchase the blocks of the land for a public park. A neighbouring landowner, Mr Miller, donated part of his property and Else- Mitchell Park was created.

Development of the Springwood industrial estate in the 1970s resulted in the loss of a large area of Blue Gum Forest on part of 40 hectare granted to explorer William Lawson in 1834. In 1978, when a townhouse development was planned for the last 13 hectares of this patch, concerned members of the community pointed out that the site had considerable ecological and historical significance and extraordinary natural beauty. Council eventually purchased the land to preserve the forest and this became Deanei Reserve.

Rae Else-Mitchell also wrote many stories about the Australian bush which can be seen here.