By Justine Bourke on 17 September, 2021 in News Updates, Walks 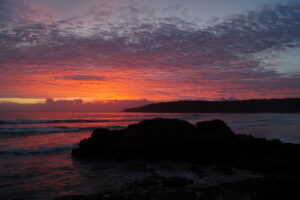 In 2019 the NSW National Parks and Wildlife Service (NPWS) exhibited a draft Light to Light Walk Strategy along with amendments to the Ben Boyd NP Plan of Management. The draft Strategy proposed a signature multi-day coastal walk, transforming the existing campground walk experience with hut to hut and lighthouse style accommodation in addition to new walk-in campgrounds. There were also proposed realignments to the existing track. As well as forcing independent walkers and others into formal campgrounds, the draft Strategy also proposed the prohibition of bush camping along the walking route.

The public exhibition attracted over 200 submissions, including from Bushwalking NSW Inc and bushwalking clubs. NPWS has now released the final Strategy and Plan of Management Amendments along with a report on submissions made and responses. These documents can be accessed here.

The final Strategy delivers much of what was proposed in the draft, although changes have been made to address some of the concerns raised during the exhibition period.

Bush camping will be allowed at Mowarry Point although it is unclear if the existing area will need expansion over time. NPWS will not co-locate independent camping with accommodation at Hegartys Bay. Independent camping will be relocated from Hegartys Bay to purpose built walk-in only sites at Bittangabee Bay. A separate group camping area will also be developed at Bittangabee Bay. Given the new facilities proposed at Mowarry Point, NPWS will no longer construct purpose built walk-in only campsites at Saltwater Creek. Two new hut accommodation sites at Mowarry Point and Hegartys Bay are proposed to cater for a maximum of 36 walkers per night. The existing accommodation at Green Cape Lightstation will be reconfigured to accommodate 36 walkers.

The Strategy confirms that the new accommodation will be managed by NPWS rather than a commercial operator.

The proposed walk has been awarded $7.9 million funding by the Regional Growth – Environment and Tourism Fund program, an initiative of the NSW Department of Planning, Industry and Environment. Subject to approvals, work on the first stage was expected to commence in late 2021 and be completed in late 2022. Before work commenced, a Review of Environmental Factors was released for public comment.

To assist with the implementation of the Strategy, NPWS will be establishing a Light to Light Walk Stakeholder Reference Group. It is hoped that this group will include representation from the bushwalking community.

NPWS has also released a Review of Environmental Factors (REF) to inform the proposed upgrades to the Light to Light Walk. The REF is open for consultation until 15 October 2021. BNSW Inc will be making a submission on the REF and affiliated clubs are encourage to do likewise. The REF and accompanying documentation can be found here.