By Justine Bourke on 10 December, 2020 in Bushwalking history

Fifty years ago, on 14 November 1970, nine members of Sydney Bush Ramblers (renamed Sutherland Bushwalking Club in 1977) placed a visitors’ logbook on the top of the 1132m Currockbilly Mountain, in the south west Budawang Ranges (east of Braidwood).  The logbook, still remarkably intact in its metal container, had been rediscovered earlier in 2020 after the devastating bushfires, by David Poland from the Canberra Bushwalking Club.

David, having seen the name Sydney Bush Ramblers in the first logbook entry, contacted Shaune Walsh, our president and invited the club to join a small COVID-safe group to celebrate this 50-year anniversary.  The plan was for four from SBC (Shaune, Ken Newman, Tony Larkin and Phil Meade) to meet on Saturday morning 14 November 2020 with a group from the Canberra Bushwalking Club for addresses later that day by David and Shaune to commemorate the anniversary at the top of Currockbilly Mountain.

This is an “R” or ROUGH walk. Whilst not long in distance (8 km return) please don’t be fooled. This walk does involve a 400 m elevation climb and descent. In parts it is very steep. Most of it is off track, ie there is no path or animal track to follow at all. It takes me 2.5 hrs to walk the 4 km up and another 2 hrs to walk down plus an hour to explore on the summit. So, for some people this will be a long day. Whilst the scrub is light, as most of it was burnt in the 2019/2020 fires, there is a lot of loose rock underfoot. You will need to be sure footed. You will need to expect to get sooty and black from the burnt sharp sticks and legs so wear old tough clothes. There is no water.”

After an overnight stay in Braidwood, with the above in mind we set off from the cars past Mongarlowe at 9.00am, with a short rest mid-way, reaching a point very close to the top in 2.5 hours after the 400m ascent.  We then diverged a short distance south to an overgrown stone mound trig. Here David carefully opened a small metal container left at the trig, inside of which were details of people having visited there dating from the 1960s including the famous Colin Watson OAM.  The records were very fragile and a decision was made that David should deliver the container, including contents, to the National Museum in Canberra. Something suitable will be put there in its place.

At midday David made a short address providing some background to the walk.  An invited botanist also explained some of the key features of the area, including a nearby temperate forest, which he said was unique to the area.

Shaune, in closing, thanked David Poland and his club for organising the celebration.

Some 300m north of the area, where the logbook has been placed, there’s a lookout.  It’s well worth visiting as it provides spectacular views to the north and east, including views to Bibbenluke Mountain, Mt Owen, The Castle and Pigeon House.

We left Currockbilly Mountain retracing our route taken earlier that day (yes – it was rough and steep) to where Shaune had left his car; we returned to Sydney that night.

I very much appreciate and I know I also echo the sentiments of Ken and Tony, the time and effort Shaune put into organising the club’s participation in the day and we appreciate the opportunity to take part in this historic event. 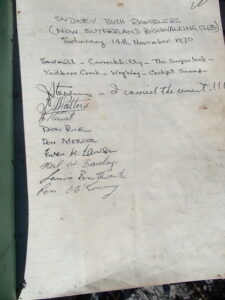 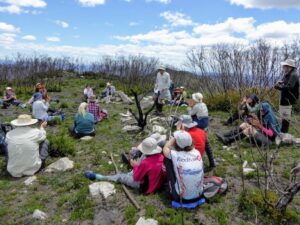 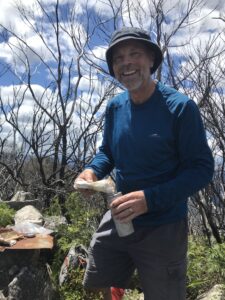 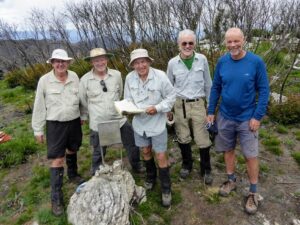 By Leonie Bell on 16 November, 2020 in Affiliated club news

This year Sutherland Bushwalkers celebrates its 50th anniversary and has published a commemorative pictorial club history to celebrate the milestone. 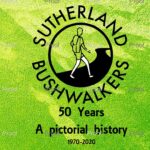 It would be difficult to determine when the club commenced, as it started with a very informal gathering of like-minded people. Most of them worked at the Atomic Energy Commission at Lucas Heights or were connected with various Scouting and Rover groups in Sutherland Shire. The first activity of the group was a bushwalk from Yadboro up the Kalianna Ridge into the Monolith Valley and to Mount Owen on the Australia Day weekend, in January 1969.

In these very early stages it was an all-male association simply because of the common AAEC and Scouting link, but it didn’t take too long before a few more friends and wives were attending the activities.

Activities in the late sixties were arranged very casually when one of the group would write a brief description of an outing and then send it to all the others. Early activities included caving at Colong and Tuglow, walking the Budawangs, the Blueys and Kanangra, canoeing the Kangaroo and Shoalhaven. About two-thirds of the group had reasonably good bushwalking experience but there were virtually no caving, canoeing or other bushsports skills. Even so, this provided a good basis for real adventure and enjoyment of the bush.

By mid-1969 the group had expanded to about thirteen ‘members’ and some felt that a title would be appropriate. One name, ‘The Intrepids’ was considered to be a little irrelevant. About May 1970 the group chose the name ‘Sydney Bush Ramblers’. However, by the end of 1969 the casual group was still without any formal structure, club officers or regular meetings.

With the numbers gradually increasing to twenty-one by March 1970, a sketchy program of eighteen activities was compiled for that year. 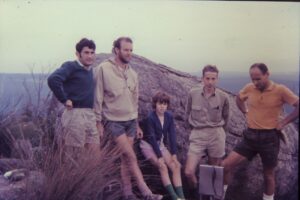 During 1970, membership increased slowly through friends and personal contacts and by August there were about twenty-eight on the club list. During one bushwalk, the group met some members of the Catholic Bushwalkers who suggested that they should consider affiliating with the Bushwalkers Federation (forerunner of Bushwalking NSW). Little was known of the organisation, so they send a delegation to a Federation meeting to learn a bit more about their requirements for affiliation.

As a result, the first club general meeting of thirteen people was arranged in September 1970 to discuss this issue and to decide if it was worth joining. It was now just on two years since the original eleven decided to go bush. By the end of 1971 club membership had increased to 42 and regular meetings were held at the Caringbah Scout Hall, where they remained until a brief spell in 2006 at Kirrawee Soccer Club building, before relocating to their current home of the Stapleton Centre in Sutherland. 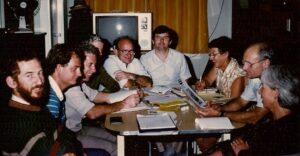 The club attracted many inquiries for membership during the early 1970’s but most were not interested in a club based in the Sutherland Shire and it became frustrating for the Club Committee to deal with inquiries from people who were not joining. The problem was that the Club’s name contained the word ‘Sydney’, creating confusion with the Sydney Bushwalkers Club, and also an expectation that Sydney was the club’s location. At the Annual General Meeting of February 2, 1977, the club officially became Sutherland Bushwalking Club.

Today Sutherland Bushwalkers membership holds steady at around 300 members, mostly from Sutherland Shire and the Georges River area. They conduct around 230 activities per year, attracting approximately 2,300 participants in bushwalking, cycling and kayaking in the Greater Sydney Region, around Australia and throughout the world. Bushfires and Covid-19 may have disrupted plans for anniversary celebrations, not to mention the temporary cessation of the activities program in 2020, but the club is once more enjoying friendships created through Covid-safe experiences in the bush. 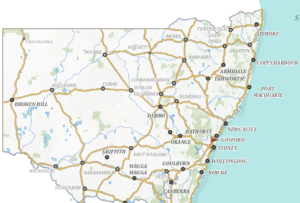 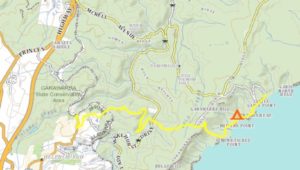 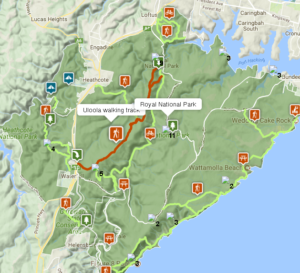 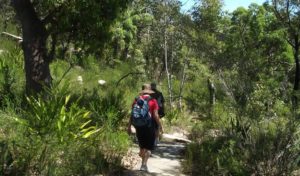