By Justine Bourke on 11 July, 2022 in Events, News Updates, Volunteering

To successfully run the event, Camp Quality are looking to recruit at least 120 volunteers. Every single volunteer will play a critical role in helping to deliver a safe and fun event and raise funds to support families facing cancer.

There are a range of roles available, but many would really benefit from teams of people that already know each other.

Volunteers can select more active roles that involve walking long distances or can choose a less physically demanding role and work at one site for the duration of their shift.

As a team, participants could run a Fun Stop together, managing the Start Line or Finish line, or for a more active roles, mark a section of the trail or act as one of our Tail End Charlie teams.

A trail marking shift or Tail End Charlie shift involves walking a section of the trail (sections range from 8.5km to 20km) and either placing marking equipment or removing the marking equipment. For all roles, there are shifts available across both the day and night, with the average shift length being around 4 – 9 hours with breaks. 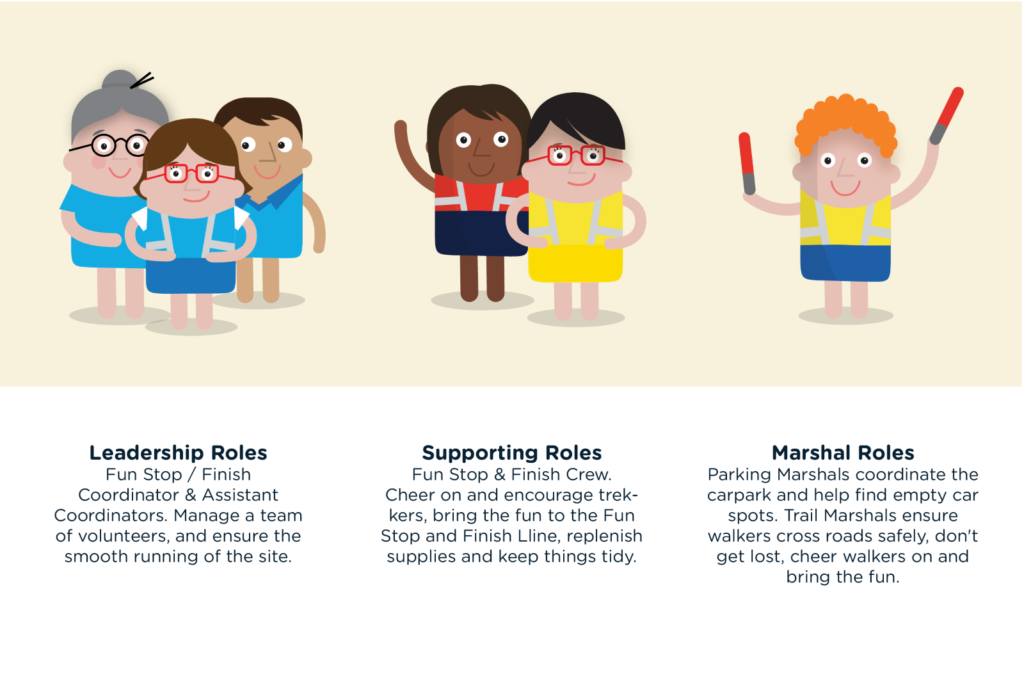 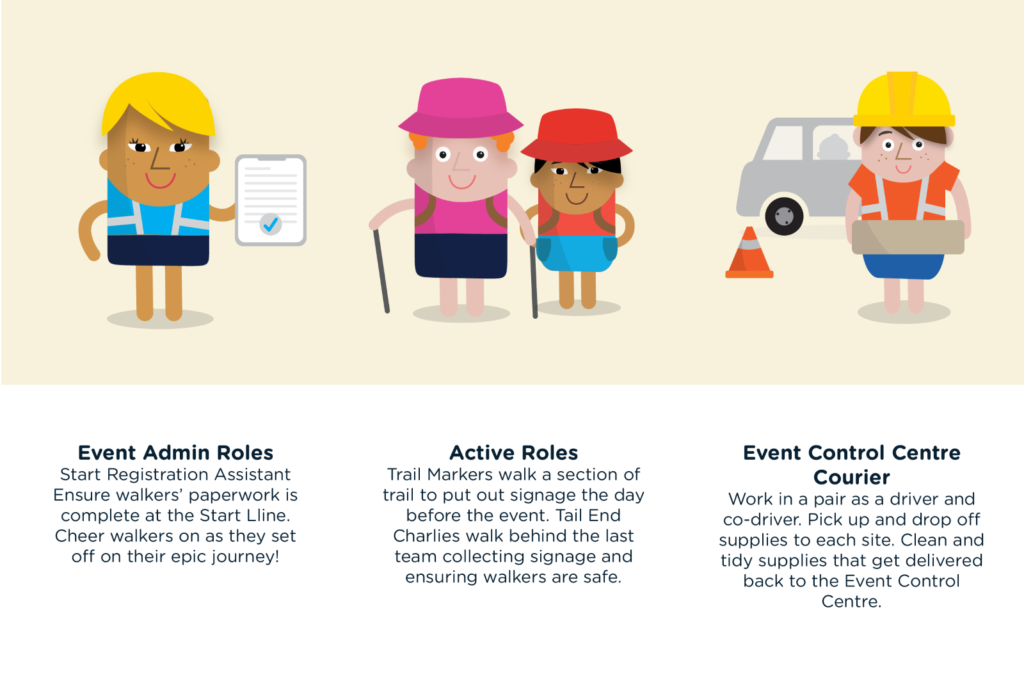 The Walking Volunteers Inc. have been proof-walking, mapping and providing walking routes around Sydney to walkers for 17 years. They now have over 1,300 kilometres of walking routes on their map and hope to add another 200 kilometres in the next month after approval has been granted by various land managers.

However, keeping track of changes on the walking routes is becoming more of a challenge as the network increases. The Walking Volunteers want to thank the walkers and land managers (e.g. Councils, National Parks & Wildlife Service, Western Sydney Parklands Trust, etc.) who often advise them of new and changed paths and tracks. However, tracks and paths are often closed for essential infrastructure (e.g. sewage pumping stations, light rail, etc.) or damage from natural events. It may take several months before the Walking Volunteers find out about these closures and when they do, they are able to liaise with land managers and establish alternative routes which are immediately updated on their maps and, via the magic of the Internet, updated on walkers’ smartphones, tablets or PCs. However, finding out about changes may take months and, in the meantime, walkers find it very frustrating to find a walking route on the maps has been closed.

So, the Walking Volunteers are introducing a program called Sydney Trackwatch to discover any changes or closures to the walking routes on their maps as soon as possible. It is very simple and does not require filling out complicated forms. Just let the Walking Volunteers know (Email: info@walkingvolunteers.org.au or Phone: 4784 2002) immediately of any changes or closures on the walking routes shown on any of their maps (Sydney Walking Tracks, Walking Coastal Sydney, Great West Walk). Also, let them know of any alternative routes you used to bypass the problem area. They will immediately re-walk, re-map and put the alternative routes on their maps as well as follow up the organisation responsible to find out when the walking route will be re-opened. When it is re-opened, they will immediately re-walk the route and change it back to the original course.

A good example of this is North Head, where the Walking Volunteers changed the route on their maps after the intensive bushfire in October 2020 and are now liaising with Sydney Harbour National Park and Sydney Harbour Federation Trust to change back to the original route when the fire-damaged areas are re-opened to the public.

All it takes is a quick phone call or email to assist the Walking Volunteers and your fellow-walkers!