By Justine Bourke on 6 March, 2021 in Awards & Recognition, Conservation

Peter Stevens, a past President of the Wolli Creek Preservation Society, has been
honoured by Canterbury-Bankstown Council with its inaugural Jack Mundey Environment
and Heritage Award. 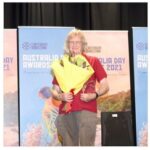 “This is recognition of Peter’s long-term commitment to the completion of the Wolli
Creek Regional Park, established and grown as the result of community pressure, led by
the Society, over several decades.’ said Gina Svolos, the present President of the Society.

“The Park is now nearing completion and Peter has renewed his commitment by
organising to protect the Wolli Creek Valley bushland and the Regional Park from the
proposed location of an industrial plant within the Park boundaries. The proposal would
have negative effects on both the natural environment and a heritage-listed structure,
the two things cited in the Award, and for which Jack Mundey as an initiator of Green
Bans is rightly famous.”

“There is a better alternative nearby: a vacant, government-owned, non-bushland site,
outside the Park boundaries that we want Sydney Water to use.” Ms Svolos emphasised.
Mr Stevens reports that, working with the Nature Conservation Council of NSW, the
Society’s petition to the Minister for Water, Melinda Payne, passed 3,000 signatures on
February 10 and is still growing.

“That is a thousand signatures a week since its launch,” Mr Stevens said, “and over 100
of these are from interstate and many more from regional NSW and urban areas remote
from the Wolli Creek Valley. Which goes to show that while people may leave the Valley,
the Valley does not leave their memory or their concern.”