By Keith Maxwell on 17 July, 2020 in Bushwalking history

The walk to Taffy’s Rock is a popular out and back walk from Cowan Station for many Sydney Clubs.  Access can be by train or car.  Details of the walk are not hard to find.  But who was Taffy?

Around the 8th January Dorothy Vera “Taffy” Townson made news all around Tasmania and NSW for the wrong reason.  She had died of snake-bite; twice on the leg and elsewhere on a multiday walk in Tasmania.

Taffy joined the Rucksack Club in January 1944 and must have been an independent woman who was 39 in 1948.  In 1948 the Rucksack Club was a strong club with around 100 members of whom 33% or more were women.  The Hikers Club of Sydney became the Rucksack Club in November 1936 but unfortunately faded away around September 1973.  A strong portion of the club had served in WWII as service women and men.

In 1947 the Murwillumbah area was her home where she may have been the proprietor of a hair dressing salon.  She approached Alfred Watkins and Sam Hinde to join a Rucksack Club multiday walk from Waldheim Chalet (Cradle Mountain) to Lake St Clair in Tasmania.  Well into the walk beyond Pelion Hut her friends went ahead while she was left alone for a toilet break.  Unfortunately, she disturbed a Tiger Snake which struck three times.

Extreme efforts were made to get medical assistance from Sheffield, outside the National Park, to no avail. Survival may have been unlikely anyway.  Two only of the bites were attended to via the basic treatment methods of the time.  Taffy may have had to walk to join her friends plus (it is said that) she was too modest to say that a third bite had occurred when her underpants were down.

Taffy died about 4.30am on 8th January.  Bushwalkers from Sydney University Bushwalking Club (SUBW) helped carry her body out of the National Park.  The track could only allow two at a time to carry the improvised stretcher in 10 minute bursts.

Taffy now lies in Devonport Cemetery.  At the Rucksack Club General Meeting on 14th January those present stood for a moments silence to remember this well-respected member. Plans were started almost immediately for a memorial to Taffy. Tasmania would not accept a memorial but on 20th March a memorial walk was held with the hope that in future the Lands Department would accept a nomination for a location to be named in her honour.

Minutes from May 1948 show that member Ted Sloane was delegated to seek such a spot.  At the General Meeting of January 1950 a quote from Raynore Pty Ltd of £8.8.0 was accepted for the manufacture of the current plaque at Taffy’s Rock.  The Club to bear the full expense.

So, when you are next at Taffy’s Rock spare a moment to reflect on the unlucky Taffy and her snake bite. 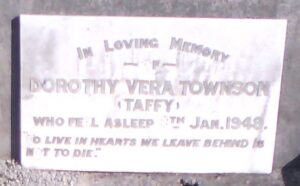 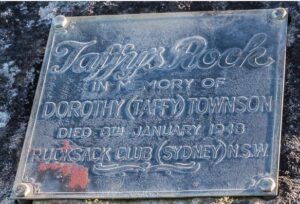 The Chardon Award
Bushwalkers were there to (in WW2)