By Jaimey Foti on 5 May, 2018 in Bushwalking safety

Shoalhaven Bushwalkers had a first aid incident recently that resulted in some rather creative first aid practice involving a makeshift stretcher.

A short while into an off-track walk, one of their members ruptured his achilles tendon jumping between rocks.

After discussed diagnosis and plan of action, three members returned slowly with the patient, using borrowed walking poles, to the cars.

While waiting for the return of two of the walkers,  the remaining group decided to do a bit of first aid practice. Since there were no heavy duty rain jackets in the gear that day, they decided to try making a stretcher out of day packs. 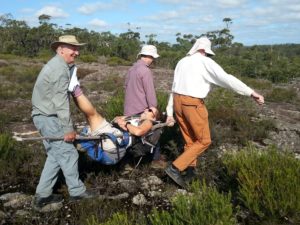 As you can see, this was their successful result. In a real situation the packs could be emptied to lighten the load leaving a few soft items for support!